The slight eastern Netherlands accent reveals his origins, the lovely town of Kesteren in the Betuwe region. Bart Hoefakker has been a member of Gemini’s Management Team for the past two years. His job is to manage ‘O&M: Operations and Maintenance’. Now that the wind farm is nearing completion, his compact team is busy organising as much electricity production as possible. 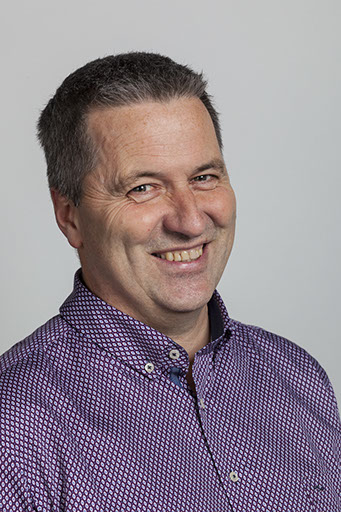 Music ‘I like different styles, but the Rolling Stones are still great and never boring.’

Films ‘Not a great film lover, but I watch Love Actually every December!’

Hobbies ‘Football, reading, gardening and pottering about at home.’

Favourite destination ‘Sun, sea, beach, good food and a little bit of culture. Usually around the Mediterranean, but our holidays in Curacao and Bonaire really stood out too.’

‘We have to show

that what was once envisaged really

People who studied HTS Electronics in the Nijmegen region in the 1980s stood a good chance of ending up at Philips’ chip division. Although Bart Hoefakker graduated in nanotechnology around that time, things didn’t quite turn out that way for him: ‘Just when I started out on the job market, Mr. Timmer started his tenure at Philips with his Centurion operation. The result? Thousands of people lost their jobs.’ But the Start temp agency still had Bart’s name in its card-index box after a holiday job, and one day he received a telephone call that changed his life. ‘A wind turbine company was looking for a young, enthusiastic technician to work on its operating systems.’ The sector was still in its infancy at the time, recalls Bart. ‘With its feet in the clay, you might say; busy with the electronics and the controls in the turbines. Repairs, commissioning – the whole package. At the time, the turbines had 23-metre rotor blades, and we thought they were big. Now the blades are a staggering 126 metres long!’

Working for this small and well-organised pioneering company engendered a ‘three musketeers feeling’: ‘And it involved so much more than what I learned at college. I alternated between inside and outside. As a result, I was able to develop and grow very quickly. At a given moment, we also expanded abroad. I found myself going to places like Curaçao and Palm Springs. It sounds exotic, but actually it was hard work. In the mid-1990s, I worked with people in the interior of India and one of them now also works in the Gemini O&M team. It was a small world, the wind sector, and it still is.’ A three-year excursion saw Bart join the management of a company in the Betuwe region that manufactured fruit sorting machines. ‘Aged 32, I was responsible for all the services and for the construction activities too.’ But the wind kept its hold on him. ‘I noticed that I missed the wind. Around that time I was asked if I’d like to start managing wind farms for Nuon – on behalf of the owner. That was just the ticket. I know the product, I know the people, and I had worked outside in the past.’ Later, working with Shell on the NoordzeeWind project off the coast of Egmond, he met Matthias Haag. Matthias arranged to contact him again in early 2014: ‘I set up the management team at NoordzeeWind. But once that was up and running I had reached a dead end. I was searching for a new challenge and that’s exactly what Gemini offered me.’

‘Optimising the process together

so that everybody is

The invitation to work at Gemini presented Bart with a dilemma: ‘Initially, I had said to Matthias: first make sure the project is definitely going ahead!’ When it became a reality, it was a huge challenge. To prepare the operational phase, develop a maintenance strategy, sign contracts, and get shareholders and building contractors involved: a really broad package.’ Having started on his own, Bart now has a full team around him. The main challenge: ‘The transition from realisation to operation has to be flawless. We have to show that what was devised back then really works and makes money.’ Whereas the Gemini project team is very dynamic – with all kinds of disciplines that complement each other and give each other constructive criticism – the team for O&M is different. Bart explains: ‘We’re more focused on the fine-tuning. And you need a different breed of person for that. I looked around for those characters and we now have a closely-knit team of seven or eight employees. What binds us is the feeling of responsibility: the stakes are high, there must be a constant supply, 24/7.’

For Bart, too, there are new challenges: ‘Every day we have to sell the electricity that we’ll generate tomorrow. That’s a whole different ball game. Operating in a market gives you a special feeling.’ But the basis is the technical performance of the wind farm,’ adds Bart straightaway. ‘That’s our first goal. It all has to run properly, literally and metaphorically. And then of course we’re always dependent on the wind. You can calculate with averages over a period of twenty years, but then you get a December that’s totally different to what you expected. That keeps things exciting.’

It will soon be time to perform maintenance. Then parties will be deployed who were chosen for their quality and experience: ‘We make agreements with each other about the performance to be delivered. I always aim for win-win situations. To optimise the process together so that everybody is better off. After all, we’re starting a long-term relationship. It would be great if, at a certain moment, we could develop a kind of Gemini feeling with those parties. After all, the turbines are our babies, and we need to look after them and keep them healthy.’ That is why the people in the Gemini O&M team should have more than just a knowledge of the subject matter: ‘Besides knowing about the various packages, it’s also important that our people are in control of their soft skills. Communication and team-building are just as crucial.’